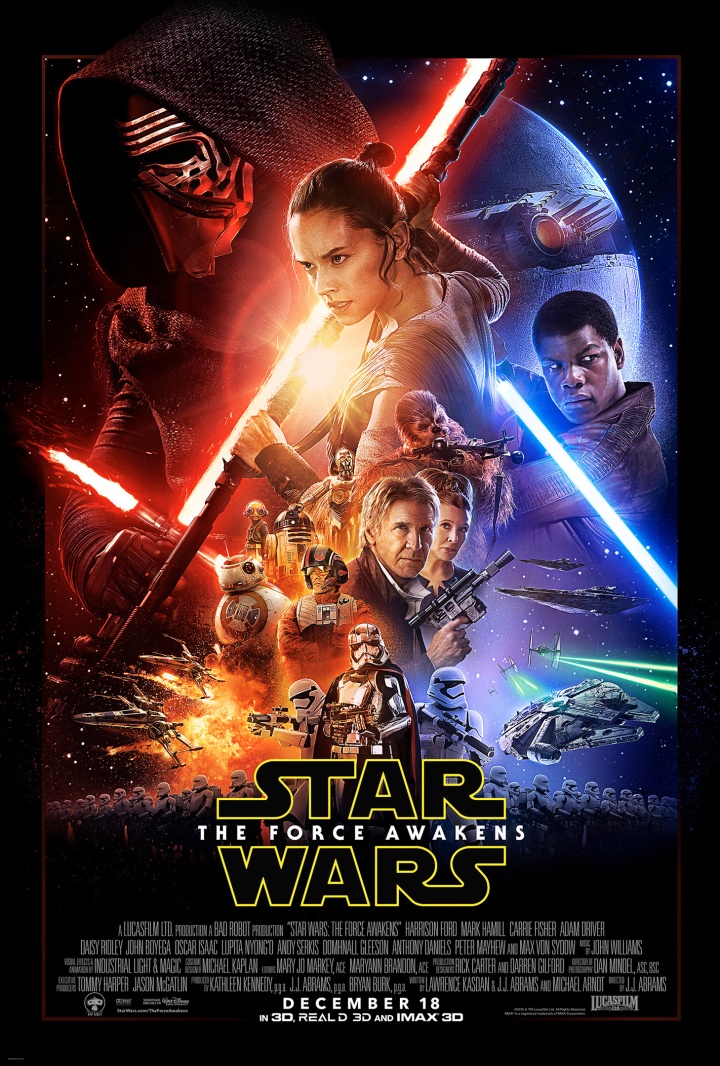 Okay, I know it’s perhaps a bit mainstream for this blog, but to hell with it, the Star Wars movies are an indelible part of my cultural hinterland. Besides which every other Tom, Dick and Harry has thrown their two’pennorth in, and the Star Wars universe has cool spaceships, droids, lightsabres, walking carpets and oh god, will someone deliver us from the leaden prequels…

Well, say what you like about JJ Abrams, but the bloke knows how to spin a yarn, and on this showing he might just have saved the Star Wars IP from disappearing up the Trade Federation’s backside. There isn’t an inch of expository lard to be trimmed from the first outing since Disney paid the equivalent of Africa’s GDP to get their hands on the property. You can almost hear the sound of Mickey Mouse mopping his brow with relief.

I have to admit, I went in with low to zero expectations. Perhaps that helped, but my initial reaction is that the galaxy far, far away has got its mojo back. Perhaps the lack of blue screen helped, the deliberate scaling back, less is more approach to the CGI, Abrams decision to film in real locations, making the Star Wars universe feel like a real place again. All these factors edged me towards giving The Force Awakens a favourable nod, yet there is something intangible about Episode VII that makes it feel like a Star Wars movie, a spirit that the prequels failed to capture (although I should add that I think the Clone Wars animated series does).

It’s this impossible to put your finger on ‘x factor’ that swung the movie in a favourable direction for me. Inevitably it already has its detractors, but people my age just need to get over the fact that it’s not going to be like it was when you first watched A New Hope or Empire or Jedi when you were six or seven years old. The cruel world of death and taxes inevitably soils your sense of wonder to some degree. Such is life.

I won’t bother to blather on about the plot here, there are plenty places you can go to for a full throated review of the narrative, spoilers and all. What then does the movie have going for it, I hear you cry? First, the two leads; Daisy Ridley does a hugely impressive job of carrying the weight of the movie on young untested shoulders, with John Boyega putting in a grand turn as comic foil playing a deserting stormtrooper (specialisation – sanitation. Can’t they get droids the clean the traps?) Harrison Ford pretty much phones in his performance, but you get the sense that playing Solo again feels like putting on a comfy old jacket for him. His scenes with Carrie Fisher carry an emotional depth that betrays thirty years of their characters unseen travails with a glance and gesture almost sans dialogue, a masterpiece of small acting and ‘show, don’t tell’ direction. Abrams understands that stories are ultimately, all about characters.

New droid BB8 is endearing rather than irritating, and the already much maligned by fandom Kylo Ren is pitch perfect as the wannabe dark jedi with anger management issues. Yes you want to give him a hiding, but surely that’s a tribute to the Adam Driver’s portrayal of who Ren is as a character. A dislikable sulky little wretch who didn’t get enough cuddles off his mum and now wants to go round blowing up planets because of it.

Plenty of questions are raised along the way, neatly setting up the story arc for episodes VIII and IX, and the ending is a classic cliffhanger; Abrams knows to always leave ‘em wanting more. On this showing I await the next instalment with renewed excitement.