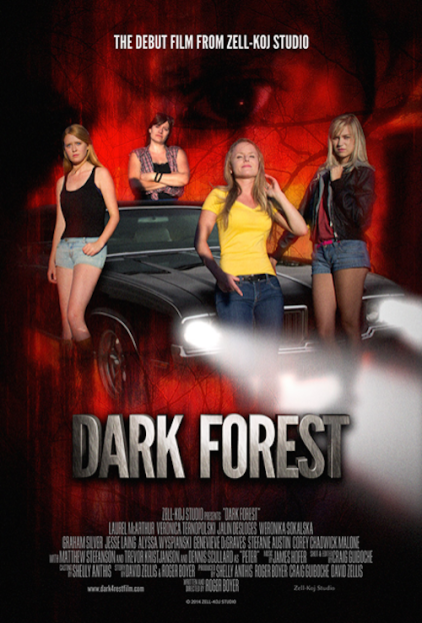 Dark Forest is an ultra low budget Canadian horror flick that riffs of those well worn staples of 80’s stalk and slash pictures, namely woods, twentysomething girls and a mad killer. Playing of these tropes, the first half of the film is a very slow burning affair that takes its time introducing the four main female protagonists, who are planning a ‘get away from it all’  weekend camping trip. Concentrating on character and dialogue is unusual enough for this kind of fayre, but the film also takes an unexpected turn when revealing that one of the girls, Emily, is feeling trapped in an abusive relationship with her controlling boyfriend Peter. After a confrontation between Peter and her friends, Emily and the girls head off into the country.

Brooding, and feeling humiliated that Emily has disobeyed his wishes, Peter sets off in pursuit, determined to exact revenge…

What at times seems to verge on becoming a run of the mill slasher is saved by strong performances, particularly from Laurel McArthur as Emily and Weronika Sokalska as her plucky mate Jolene. Dennis Scullard puts in a strong performance as the controlling psychopath Peter, even managing to lend the monster a hint of pathos in the climactic stages.

It’s also refreshing to see the female leads fighting back, and not merely being required to do the cliched scream queen thing of running through the dark in their smalls before meeting their inevitable demise. The domestic violence angle also lends the film relevance, reminding us that the horrific often occurs in everyday life, often behind closed doors and thus going unnoticed.

While the male characters are all universally unlikeable and are somewhat stock archetypes, this doesn’t much detract from proceedings as it’s pretty clear from the start that the film is the girls show. All in all then, a decent first feature from director and writer Roger Boyer, with a likeable ensemble with the four main protagonists, naturalistic dialogue, and some well done and restrained gore effects on what was clearly a tight budget.

Dark Forest is currently available to buy on DVD, Blu-Ray, or can be streamed via Amazon Prime.

That’s a good enough recommendation for me!
Happy Star Wars Day everyone!
https://www.comicbookmovie.com/sci-fi/dark-phoenix-director-simon-kinberg-to-write-produce-battlestar-galactica-movie-for-universal-a179485#gs.gpw8uc