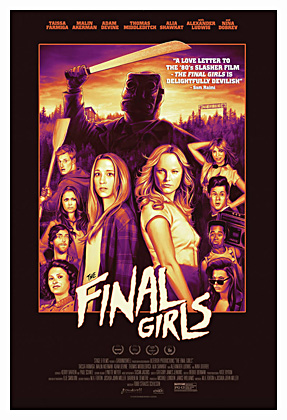 Teenager Max Cartwright (Farmiga) lives with her free spirited but down on her luck actress mother Amanda (Akerman). One night after driving home from yet another failed audition, they are involved in a horrific car accident. Amanda is killed but Max manages to survive without serious physical injury.

Cut to three years later and Max is finally beginning to put her life back together. Her best friend Gertie’s (Shawkat) brother, horror film geek Duncan (Thomas Middleditch)  bribes her to attend a screening of Camp Bloodbath, a 1980’s stalk and slash horror flick, as a guest of honour, the film being her late mother’s most well known film role, playing the virginal Nancy.

When a fire rips through the auditorium, Max and her friends tear open the projector screen to escape, and inexplicably find themselves transported into the film itself. Max immediately forms a bond with her dead mothers character, but the friends presence soon begins to alter the events of the movie, and with the original ‘final girl’ killed off in a freak accident, Max has to try and save Nancy from the movie’s disfigured psycho Billy Murphy (Daniel Norris), while taking on the mantle of final girl herself, and getting herself and her friends back to reality in one piece!

THE FINAL GIRLS is the ultimate meta horror comedy and an absolute blast from start to finish. Fans of the 80’s slasher cycle will find much to love here, from the obvious nods to the FRIDAY THE 13th series to the well observed culture clash between the generations (the past being a foreign country – the fictional film within a film is set in 1986).

Screenwriter Joshua John Miller co wrote the script as a coping mechanism after the death of his father Jason Miller (Father Karras in THE EXORCIST), and the sense of grief and loss that plays out between Max and Amanda/Nancy lends a poignancy to what could otherwise have been a fun but shallow piece of comedy horror fluff.

The film also avoids the repetitious irony and knowing superiority that marred so many films and tv shows that jumped on the meta horror bandwagon started by SCREAM and which became very tedious very quickly soon afterwards. Director Schulson along with Miller and fellow scribe M A Fortin thankfully play their film for bittersweet laughs, shot through with just the right amount of nostalgia for a genre they clearly have a lot of affection for.

I’m short, THE FINAL GIRLS is a feel good horror homage that will raise a smile from even the most hardened gorehound, and will especially appeal to those who lived through the 80’s slasher era it so affectionately spoofs.