Good morning film fiends! Buckle up for KING COHEN, the true story of writer, producer, director, creator and all-around maverick, Larry Cohen. Told through compelling live interviews, stills and film/TV clips, the people who helped fulfill his vision, including Larry himself, bring one-of-a-kind insight into the work, process and legacy of a true American film auteur. Few can boast of a career as remarkable or prolific, spanning more than 50 years of entertaining audiences worldwide. 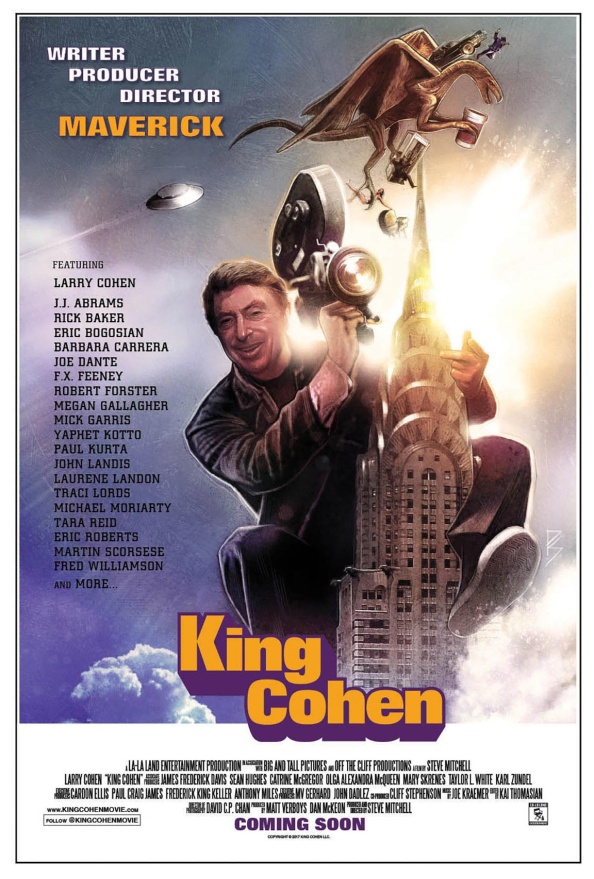 Cohen, best known for resourceful low-budget horror and thriller films that combine social commentary with prerequisite scares and welcome humor, is responsible for celluloid classics including BLACK CAESAR, IT’S ALIVE, Q: THE WINGED SERPENT, and THE STUFF. He was also a major player in the Blaxploitation films of the 1970s, as well as a prominent Hollywood screenwriter (PHONE BOOTH).

Winner of the 2017 Fantasia Fest Best Documentary Feature Audience Award, KING COHEN hails from Rondo Award-winning writer/director Steve Mitchell, whose film and television credits include co-writing the beloved cult horror/comedy CHOPPING MALL. KING COHEN is a La-La Land Entertainment production, in association with Big And Tall Pictures and Off The Cliff Productions. It is directed and produced by Steve Mitchell and produced by Matt Verboys and Dan McKeon.

KING COHEN begins its theatrical run July 27 in markets including Los Angeles and New York. Special event screenings of the film will also be held throughout July and August in cities including Asheville, VA and Yonkers, NY. UK and European release dates to follow.