Now in its tenth year, Grimmfest is the premier horror film festival in the north of England, and the organisers were kind enough to grant press passes to The Stricken Land so we could report back on the many delights the festival had to offer. Held at the Odeon Great Northern the centre of Manchester, we were only able to cover the Saturday and Sunday of the festival this year, and due to time constraints we weren’t able to make every single screening, but I’ve compiled all my reviews of the festival highlights for your reading pleasure below. Let’s dive in… 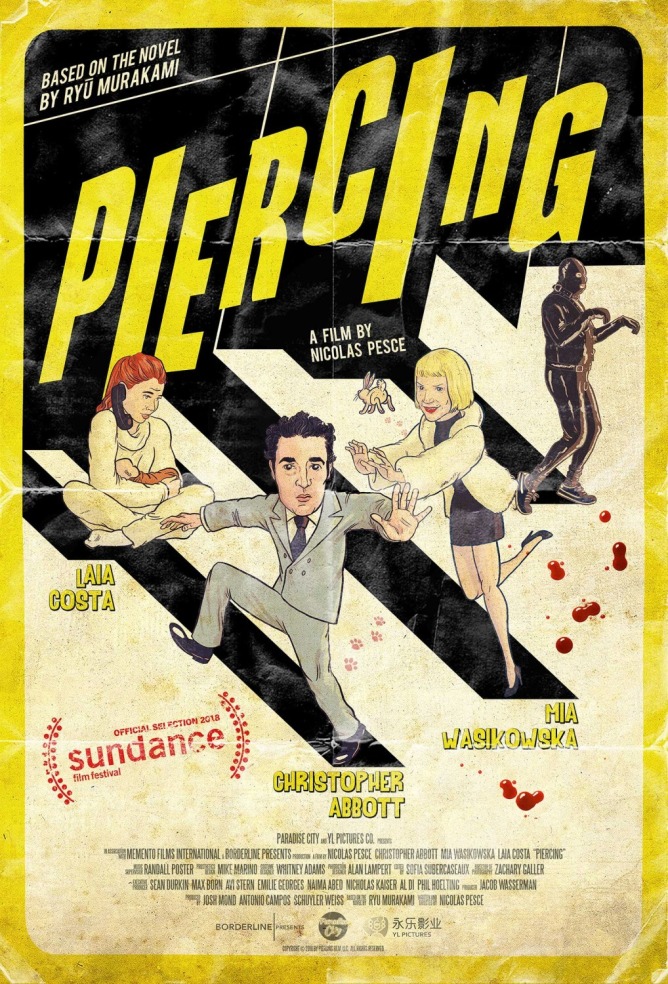 A married father of one goes on what he tells his wife is a short business trip, instead booking a hotel room with the intention of hiring an escort girl and murdering her.
Grimmfest’s press for Nicholas Pesce’s twisted relationship drama calls it a ‘date movie for psychopaths,’ a succinct description that’s hard to top.
Based on controversial Japanese novelist’s Ryu Murakami’s eponymous 1994 novel, this is a complete oddball of a film that nevertheless engages you through the portrayals of its two neurotic leads even if it’s impossible to feel comfortable at any point during its running time. Quickly turning into a black as night comedy of errors as proceedings fail to go according to the meticulous plan laid out by Christopher Abbott’s emotionally constipated protagonist, Pesce’s film veers off into Lynchian style surrealism, mixing in Cronenbergian body horror, explorations of BDSM etiquette and urban alienation all set  against its retro-eighties style neverworld and a score plucked from Patrick Bateman’s record collection.
A brave, interesting and acutely observed character study with excellent performance from its two leads. No one for a first date though, unless you’re both psychopaths of course.

A familial drama wrapped in a haunted house flick, Andy Mitton’s debut plays out like a Spielbergian take on a CONJURING movie with a sliver of ice replacing the sugary sentimentality.
Divorced Dad Simon (Draper) buys an old farmhouse in rural Vermont as a renovation project, hoping to use it as some bonding time with his son Finn. After an ambiguous warning from their neighbour about the house’s dark past, father and son soon encounter Lydia, the malicious spirit of the previous owner. Unbowed, Adam determines to continue the project, but with every repair he makes, Lydia becomes stronger…

Less a full blown horror flick than an affecting observation of father son relationship dynamics, this is acutely well observed with two deft performances by Draper and Tacker.But make no mistake, when Mitton wants to inject unease and then outright terror into the lives of his protagonists then he is a true pro, particularly in the scene when Simon takes a phone call from Finn (you’ll have to watch the movie to get the full import of this sequence.)
The nature of Lydia and the history of the house is wisely kept ambiguous and in the background, allowing the relationship between Simon and Finn to come to form the emotional core of the film. A timely lesson that horror can be so much more than jump scares and splatter. THE WITCH IN THE WINDOW serves as a textbook example why budgetary constraints are no barrier when you have well crafted narrative combined with great performances and direction. One to put at the top of your watchlist.

A group of nerdy misfit freshmen get invited to a secretive frat house for a wild sex, drugs and booze fuelled party, and the next morning are offered admittance if they will pledge to undergo a series of initiation rituals…
Riffing off the time honoured American campus culture that brought a slew of mostly forgettable frat house comedies to 80’s video stores, Pledge is a tense thriller and a razor sharp commentary on just how far human beings will go to gain acceptance from their peer group.

Director Robbins’ and writer/star Zack Weiner mix in conspiracy theories about real life fraternities like the Skull and Bones society and urban legends around arcane hazing rituals, and then crank everything up to insane levels of malice and cruelty.
The tight pacing and twisting storyline keeps us guessing as to what the outcome will be right up until the brutal denouement. This is a masterful blend of the stalk and slash and survival horror sub genres underpinned by great naturalistic performance by its cast of newcomers. University never looked less appealing. 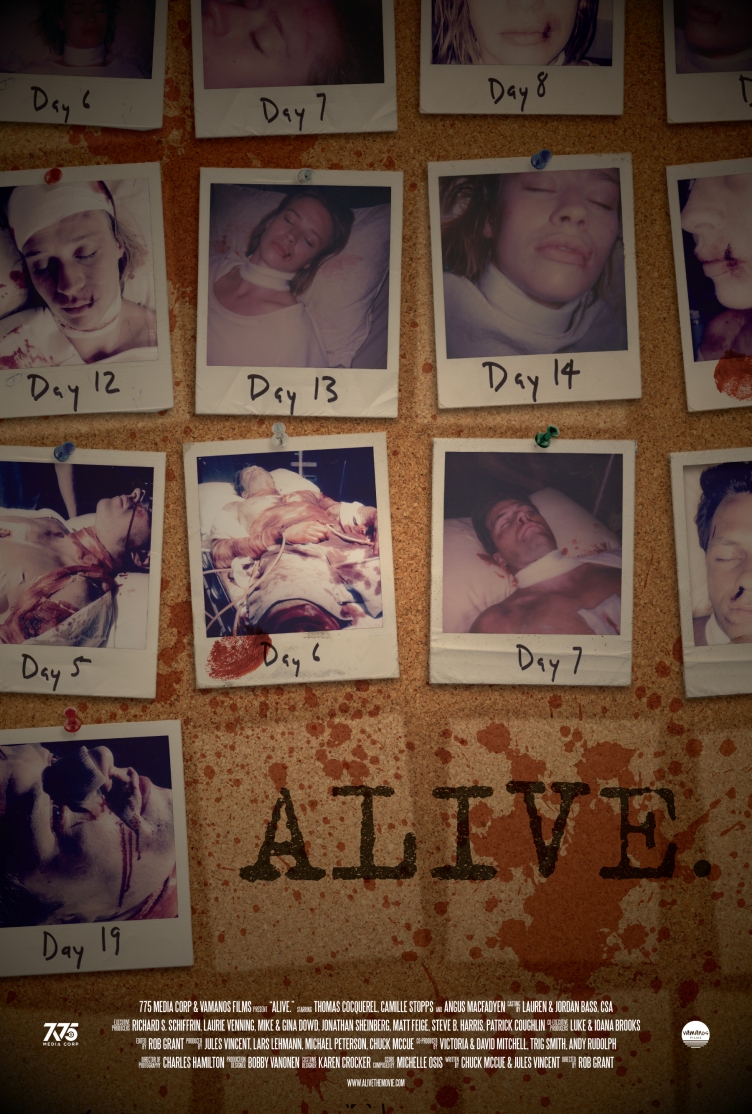 A ferociously original take on a source material that to reveal in this review would surely spoil the experience of Rob Grant’s viscera spattered thrill ride.
Two strangers, a man and woman  (Cocquerel and Stopps) awake in a derelict abandoned hospital, inhabited by a seemingly unbalanced doctor (a splendidly manic performance by MacFadyen). Nursed back to health after apparently suffering physical traumas, and with no memories of their pasts, the pair realise that the doctor intends that they should never leave…
What follows is essentially an ‘on the run’ escape movie, although we are never quite clear what or where the pair are escaping from (apart from MacFadyen’s psycho surgeon), or where an eventual sanctuary may be. This makes for a deliberately  disorienting experience for the audience and Grant’s assured direction, sense of quiet menace and frenetic pacing keep us guessing right up until the slam dunk denouement. File under essential viewing.

We also managed to cram in horror anthology NIGHTMARE CINEMA, gross out comedy horror throwback PUPPET MASTER: THE LITTLEST REICH and the period found footage chiller THE DEVIL’S DOORWAY while we were there, but I’ll be giving these a second viewing at Nottingham’s Mayhem Film Festival by the time this gets posted, so look out for my review of these in the coming week.

A big thanks to the Grimmfest organisers who were kind enough to grant us press passes for the festival, and to guest of honour and PUPPET MASTER: THE LITTLEST REICH star Barbara Crampton (gutted we missed the showing of REANIMATOR!) who was kind enough to chat and sign stuff. Her Q & A with the audience was a joy to behold, and her tales of working with legendary genre filmmaker Charles Band sent this writer in particular into paroxsms of fanboyness!  We love you Barbara, come back soon! The Stricken Land crew will definitely be making the trip north next year and plan to extend or coverage of this fine event. Keep an eye on the Grimmfest website people, and get this one in your for your calendars for 2019!