Good morning film fiends! I have a quadruple whammy of upcoming greatness for you all to feast your retinsa on as well as a cool little short form the Dobrofsky brothers over at Short Story TV. let’s dive in – 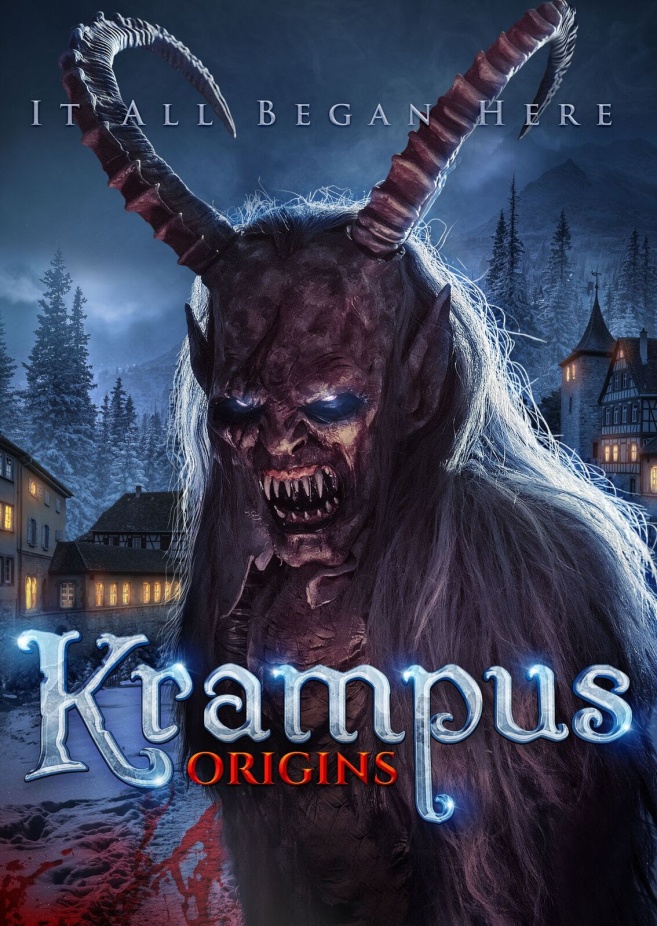 It’s going to be a killer Christmas!

The terrifying backstory of the yuletide slaughterer comes to digital and DVD this November with KRAMPUS: ORIGINS, arriving November 6 from Uncork’d Entertainment.
The first World War rages on when a group of American soldiers find a mysterious artifact that can summon the ancient evil of the Krampus.  After the men are killed in action, the artifact is sent to the commanding officers widow who is a teacher at a small-town orphanage.  The orphans accidentally summon the Krampus and the teacher, and her pupils are forced to battle this ancient evil.
Starring Maria Olsen (I SPIT ON YOUR GRAVE: DÉJÀ VU, PARANORMAL ACTIVITY 3) and Anna Harr (BETHANY, RESTORATION), and directed by Joseph Mbah and written by Robert Conway, KRAMPUS: ORIGINS on digital and DVD November 6.

This November, Gloria is transforming into something very, very strange.
From director Chad Archibald, and in the tradition of CABIN IN THE WOODS and HEREDITARY, comes THE HERETICS on demand November 6 from Uncork’d Entertainment.

A young woman (Nina Kiri of THE HANDMAID’S TALE) is abducted by a strange man who claims that a cult is hunting her. His goal is to protect her until sunrise but while restrained, she falls deathly ill. As her friends and family search for her, the source of her illness becomes more and more apparent. She’s not sick…she’s changing.
From Black Fawn Films, the award-winning and celebrated Canadian horror machine behind the ANTISOCIAL series, BITE, and LET HER OUT, comes a film that’s “part cabin-in-the-woods thriller, part psychological puzzle, and part demonic possession battleground” (iHorror).
Nina Kiri, Ry Barrett (LIFECHANGER), and Jorja Cadence star in THE HERETICS available on Demand November 6 and DVD January 5 from Uncork’d Entertainment.

The psychological “coming of age” horror film, written and directed by directed by José Pedro Lopes, also has new artwork to coincide with the Amazon and BD launch.
Ricardo and Carolina are complete strangers that meet seemingly by chance in the FOREST OF THE LOST SOULS , a place where many people go to commit suicide. These two, a young woman and an old man, are no different than the others as they also came to the forest for this very reason.
They decide to briefly postpone killing themselves in order to explore the forest and also to continue talking to one another, as Ricardo and Carolina find themselves intrigued by each other.
However, as the pair go further into the forest it becomes clear that one of them has other reasons for being in the forest, is not who they would have the other believe them to be and is actually a psychopath…

KISS KISS, BANG BANG meets classic Hitchcock in the whodunnit of the year!
Winner of no less than 9 major film awards, including Best Feature Film at the Hollywood Boulevard Film Festival and Best Indie Feature at the Los Angeles Film Awards, Clyde Cooper (Souvenir Films) is on the case this November. Jordi Vilasuso plays Silicon Valley private detective Clyde Cooper. Hired by a tech investor to find a missing woman, the love of his life, who had mysteriously disappeared, Cooper runs into an odd ring of strange women, and weird characters until he finds much more than what he’s bargaining for.
Jordi Vilasuso, Abigail Titmuss, Richard Neil (PRODIGY), Aria Sirvaitis (ROSEWOOD), Isabella Racco (THE DOLL) and veteran actor Lou Wagner (PLANET OF THE APES) star in a Peter Daskaloff film,CLYDE COOPER on VOD November 22.

I was contacted this week by the Dobrofsky brothers, the team behind the Short Story TV YouTube channel which, in their own words are ‘Content Warriors here to frighten, entertain and inspire!’ Their newest work is MR HOLIDAY, a very dark short little fil about a serial killer who decides to celebrate new tear by making his very own snuff movie…
Check it out below and subscribe to their channel to see what else the brothers have in store. You can also follow them on Twitter @shortstorytv

Den of Geek founder and all round nice bloke Simon Brew has launched a Kickstarter campaign to crowdfund is new print format film magazine Film Stories. Already a successful podcast, the monthly mag will primarily focus  on mainstream fare but less on superheroes and Star Wars! In their own words -‘Imagine it as the magazine for the smaller screens in the multiplex, and the larger screens in the independent.’

The campaign runs up until 19th November with a target of £10,000. There are loads of different pledge levels and you can check the project out here –

https://www.comicbookmovie.com/sci-fi/dark-phoenix-director-simon-kinberg-to-write-produce-battlestar-galactica-movie-for-universal-a179485#gs.gpw8uc
Is it me or does The Suicide Squad look like a really high budget Troma flick?