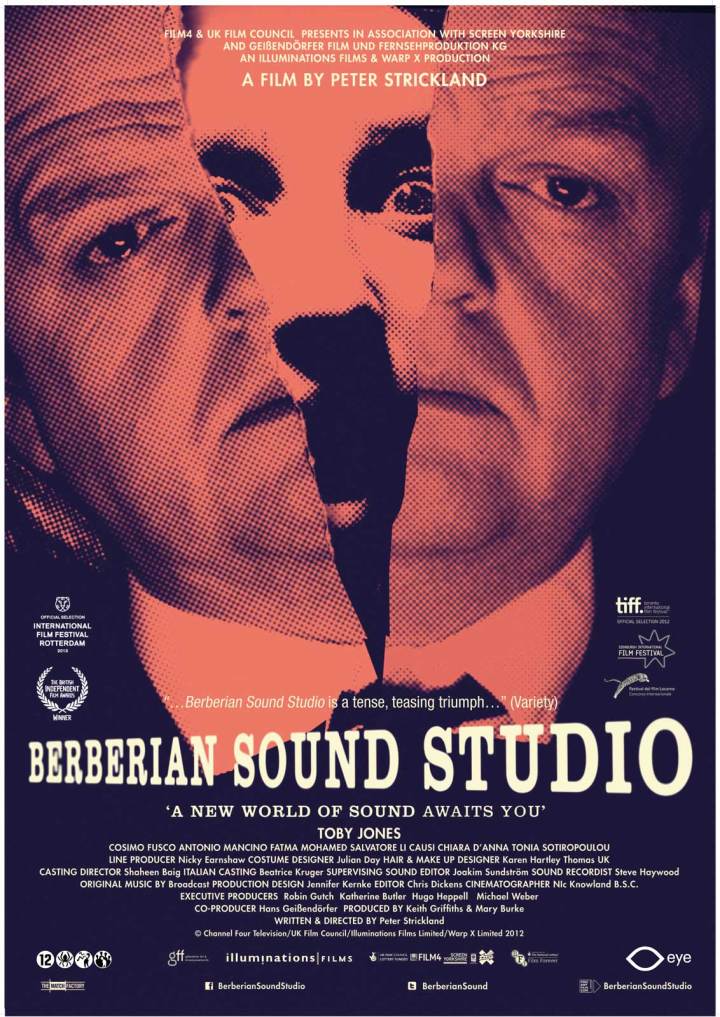 An affectionate homage to seventies Italian giallo movies, Berberian Sound Studio stars the always dependable Toby Jones in diffident Englishman mode as Gilderoy, a sound engineer hired by the eponymous film studio to create the sound design for their latest feature The Equestrian Vortex, which the slightly unworldly Gilderoy naively assumes to concern our equine friends, but which, of course, turns out to be exploitation schlock horror of the kind that got the British tabloids all worked up at the dawn of the VHS era in the early 80’s.

This being a film primarily about sound as its title suggests, we get to see nothing of the visual aspects of the fictional movie within a movie, bar its grotesquely lurid title sequence which is cleverly substituted for the credits sequence of the ‘real’ film the audience is watching. Instead we get glimpses of its narrative through the characters dialogue and sound effects (most Italian movies of this kind were usually shot cheaply, without sound, with the dialogue dubbed over the top in several languages, enabling the studios to distribute their productions into numerous European and overseas markets).

Gilderoy, belatedly realising he isn’t making a documentary on equestrian pursuits, but a horror film about undead witches laced with healthy dollops of misogyny and sadistic violence, starts to become ever more estranged from the rest of the production staff, most of whom consist of surly engineers, an ice maiden secretary and a production head with the sexual morals of Attila the Hun. Right from the start we get a feel for the englishman’s sense of alienation and displacement in a foreign clime, exemplified first by the language barrier, then by the byzantine office politics, and treatment of actresses that would make the Taliban blush.

Up to this point, at about two thirds in, I’ll admit I wasn’t sure where the film was heading, and the last third veers off into Lynchian surrealism, which judging from a lot of reviews I’ve read definitely isn’t a lot of people’s cup of tea. My own reaction was one of slight frustration, as it seemed the film lacked the courage of its convictions (is Gilderoy suffering hallucinations due to his isolation, is he going mad?) in taking the story to its ambiguous conclusion. That said, Berberian Sound Studio is perhaps best viewed as an experience, rather than a strict piece of narrative. The last act certainly has the quality of a nightmare, in keeping with a lot of Italian horror movies and giallo of this period (check out Lamberto Bava’s Demons, if you haven’t already, for a great example of this).

Certainly recommended for those with an appreciation of the oevres of Dario Argento and Mario Bava, and the underbelly of Italian seventies cinema in general. An interesting curio.

NB -For those interested Berberian Sound Studio’s director Peter Strickland (great name, but sadly no relation) has recently directed a reimagining of Nigel Kneale’s classic 70’s chiller The Stone Tape for Radio 4. At the time of writing, it’s still got a week to go on iPlayer, and is well worth an hour of your time.

That’s a good enough recommendation for me!
Happy Star Wars Day everyone!
https://www.comicbookmovie.com/sci-fi/dark-phoenix-director-simon-kinberg-to-write-produce-battlestar-galactica-movie-for-universal-a179485#gs.gpw8uc