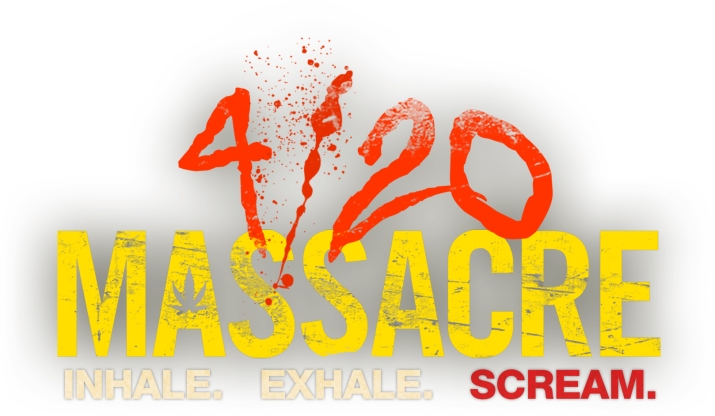 The slasher film is a well worn sub genre of the horror movie, but with last week’s release of 4/20 MASSACRE (dubbed ‘the first stoner-slasher’) indie director Dylan Reynolds and his team have managed to put a fresh spin on the concept and delivered a tightly paced character driven entry into the horror pantheon that has already received much praise in the genre press (you can read The Stricken Land’s review here.) To celebrate the movie’s release, I sent a bunch of questions to director Dylan Reynolds, who was only too happy to wax lyrical about filmmaking, the state of the industry and his love of movies in general. Let’s kick it off! –

TSL: Growing up I remember the ‘video nasties’ furore in the 80’s that gave the genre even more of an aura of ‘forbidden fruit’ Did you enjoy watching horror movies growing up?

DR: For sure- I would say I have a particular fondness for horror and exploitation cinema of the 70s and 80s. I knew I wanted to direct a horror film for my third feature and I gravitated towards the slasher sub-genre because some of my fondest “movie watching” memories from childhood came from late night viewings and VHS rentals of FRIDAY THE 13TH and NIGHTMARE ON ELM STREET sequels.

TSL: What movies would you say were your formative influences as a filmmaker?

DR: I love cinema in general- so it’s always tough to pick one movie because my tastes and “obsessions” change from month to month. I was born in 1980- so I grew up on Spielberg and Lucas movies as a kid and then in the late 80s/early 90s came the big wave of Sundance indies- and like many filmmakers of my generation I assume we’re all in one way or another inspired by Richard Linklater, Kevin Smith, Robert Rodriguez and Quentin Tarantino.  I’m also a big fan of “maverick auteur” filmmakers like John Cassavetes and John Carpenter. But if I had to pick “my favorite movie of all time” I usually go with MONSTER SQUAD.

TSL: I’ve long been of the view that the communications revolution heralded by the internet will enable the next generation of filmmakers and weaken the big studios hold over creatives. The proliferation of YouTube and other VOD sites means they can bypass traditional means of distribution to get their visions out there. As an indie filmmaker yourself, what are your thoughts on this?

DR: I would say that’s partially true- but also not totally accurate.  On one hand- yes there are more platforms/ outlets where one can distribute your movie and more and more you don’t necessarily need a rep/ sales agent, or distributor to secure placement.

However- the revenue continues to shrink with these outlets- most recently Amazon cut down how much they were paying out for Prime by nearly half.  Places like iTunes, Amazon etc may take an indie title- but they aren’t going to put that title “up front and center” like a studio movie or one of their originals- thereby effectively “burying” your little indie film and thus making it more difficult to find an audience.

Also going back to Amazon (YouTube has done something similar) where they basically “censor” indie horror movies because it broadly doesn’t “fit their standards” (whether it be violence, nudity etc) but ironically they don’t apply the same criteria to the studio or their original productions.

I guess my point is that for every perceived opportunity- the actual trend is that media corporations are getting bigger, merging, and becoming more influential/ controlling.  And usually that means the true indies will be squeezed out or marginalized more.

TSL: Back to the movie itself; what was the location shoot like? Did you have a continuous shooting schedule or was it done mainly at weekends?

DR: We shot the film in a town outside of Big Bear, CA like a true “low budget indie horror movie” in 10 days straight.  People like Roger Corman and Charles Band have been known to make movies with tight schedules like that- for us it was a necessity based upon our budget and resources… but it was also kind of perfectly fitting I think.

TSL: As a director, I think you managed to coax very naturalistic performances from the very talented actresses which contrasted nicely with the larger than life performance by Jim Storm as Ranger Rick. Did you intend this in the script? How much input did the cast give to the characters?

DR: Thank you for saying that…  I’m not sure what works for other filmmakers but the method that I find works (as far as getting believable/ naturalistic performances) is number one- cast good actors that are open to exploring and being creative.  Then I try to have conversations with each individual actor prior to filming- i.e. talking about their characters and sharing ideas/ questions etc. Then we have some readings/ rehearsals- but I find it’s best not to overdo those because you want to capture the “real magic” on set.

Then when we get out to set I try to create the atmosphere and freedom for the actors to have fun and be creative.  That means allowing some room for improvisation- either “between the lines” or doing extended takes and letting the opening and ending of scenes play out.  I also encourage the actors to “give me some options” from take-to-take… and then in editing I just go through and “cherry pick” the moments.

With Jim Storm- he was in my first film Chain Link and I basically wrote the role of Ranger Rick with him in mind.  So I definitely wrote the character as a “scenery chewing monologuing bad guy” and just had fun with it. But when it came to the other characters I tried to ground them and make them “characters that you would care about before they die”.  So in many ways 4/20 MASSACRE can be described as an “indie drama… and then a slasher shows up”.

TSL: The film is lucky to have such a talented cast. You are married to Vanessa Rose Parker who plays Aubrey, was she instrumental in casting the other parts? What attracted the other cast members to the project?

DR: Yes- Vanessa also produced the film and was instrumental in crafting the whole project… from script to casting.  She was friends and worked at a restaurant with Stacey Danger- who played the “stoner chick” Donna- and she did a reading early on and really brought a cool angle to the character- so we knew we had to have her in the film.  Stacey helped attract Justine Wachsberger (who played “Rachel”) to audition for the role and we found Marissa Pistone during the casting process… I think having the whole “strong female characters in a genre film” made the film a little unique- therefore we attracted some very nice talent.

TSL: John Carpenter said that horror movies were always the most fun type of films to make. I always imagined playing ‘the masked killer’ role to be the best bit of making a horror film. How was it working with James Gregory who plays ‘The Shape’ (nice nod to HALLOWEEN by the way!)

DR: James I’ve known for a number of years and he was one of the first people I approached when 4/20 MASSACRE was going into production.  As well as playing “The Shape” he was also the Stunt/ Fight Coordinator on the film and he even designed the cool gillie suit/ costume.  He’s a super talented dude and I consider him to be an asset that can elevate any film set he steps onto.

TSL: The movie features some great kills and gore effects. How easy/expensive is this sort of thing to stage? I remember reading an interview with the great Tom Savini where he said in the early days you had to get the whole thing done in one take or the effect would be ruined and they’d have to start again, and the director would be on his back!

DR: Our Special FX Make Up Artist was Brennan Jones… going into the project we didn’t have a big budget so I went around to some fx make up schools and asked for some referrals.  Brennan was one of the people I interviewed who was young/ hungry and got all the references I had (yes- Tom Savini’s name/ work was definitely discussed). I think we both wish we gave him more time to craft the “gags” and get them right- but as often is the case with low budget/ indie stuff Brennan would ask for 30 minutes and we’d tell him he had 10.  Considering the circumstances/ schedule I think he did an awesome job and came up with some cool/ unique stuff.

TSL: I read that Steven Soderbergh shot his latest film UNSANE solely using iPhones. If you were to give any advice to a kid with a video camera/phone wanting to make his own movie what would it be?

DR: I’d say “screw it- don’t listen to any naysayers… in the words of Lloyd Kaufman- just make your own damn movie”.

TSL: Finally, are there any plans for a 4/20 MASSACRE sequel?

DR: I have some ideas- it would be real fun if we could do a sequel…  my plan is to do a different “slasher sub-genre” with each instalment.  Part 1 was more of a “backwoods slasher”- part 2 would be an urban-set “Giallo- influenced” mystery… a ‘who- done-it?” with slasher overtones.

TSL: A big thank you for speaking with me, all the best for the future!

DR: You too- and thanks for the time and opportunity!

NB – At the time of writing 420 MASSACRE is only available in the US market. I’ll post an update when the movie will be availale in other territories –  TSL