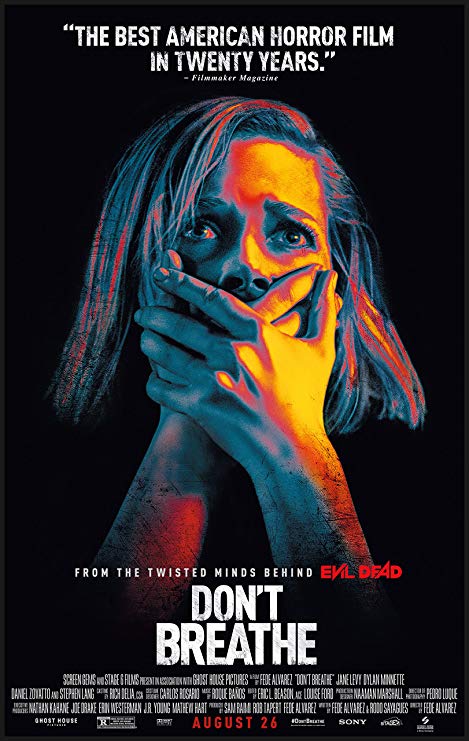 One of a crop of home invasion horrors that inverts its premise by having the occupants of said home far more terrifying than the intruders, DON’T BREATHE is a fairly efficient crime horror that mixes in themes of grief, loss and PTSD to come up with a ninety minute knuckle whitener that has enough points of  interest to make it stand alongside peers like THE STRANGERS and INTRUDERS.
As usual with the home invasion trope, the plot is basic; girl from the wrong side of the tracks Rocky (Levy), and her two partners Alex and Money make their living turning over well to do properties courtesy of Alex being the son of the man whose company installs their home security systems.
Rocky’s long term game plan is to get enough money from selling the stolen goods to move to California with her younger sister and start afresh, escaping their alcoholic white trash mother and her lowlife boyfriend.
When Money receives a tip that a blind special forces veteran (Lang) living in a deserted neighbourhood has $30,000 stashed in his house from compensation received over his daughter’s death in a road accident, the trio hatch what seems to be the perfect break and enter in order to steal the cash. Things go awry almost immediately of course with the blind man (Lang) not nearly as helpless as the house breakers imagined. He also harbours a dark secret in the basement…

From here on in, Alvarez’s film follows a cat and mouse narrative before taking a sharp turn with a genuinely surprising curveball which ups the stakes even further for Rocky.
If you can get past the film’s blatant emotional manipulation of its audience, DON’T BREATHE is a deft and well acted thriller, with enough dark turns to earn its spurs as a horror. Levy plays Rocky as the bad girl with her heart in the right place trope. She is the only one of the gang whose home life we get a glimpse of, and Alvarez telegraphs the audience that her criminality has been ‘forced’ upon her by circumstance, (and it’s for a good cause, even if it means robbing a blind war veteran.) Needless to say her male accomplices are entirely expendable. Their portrayal means that we have little sympathy for them anyway, and given the aforementioned plot revelation, the viewer quickly transfers their  initial sympathy for the bereaved war vet over to the imperilled Rocky in good time ready for the climactic confrontation.
If you can get past the film’s questionable morality, then there is an enjoyable ninety minutes to be had here, especially whenever the superb Lang is on screen, exuding a grizzled physical presence and utterly dominating proceedings. A solid entry in the home invasion horror sub genre.

Is it me or does The Suicide Squad look like a really high budget Troma flick?
Excited much?! 🤗🤗🤗🤗