A man of the cloth turns Jurassic in Wild Eye Releasing’s THE VELOCIPASTOR – coming later this year from the reputable genre label!After a devastating family tragedy, a priest travels to China to find deeper spirituality, but instead is endowed with an ancient ability that allows him to turn into a dinosaur. At first, he is horrified by his newfound superpower, but a local prostitute convinces him to use his newfound gift to fight evil – and ninjas. 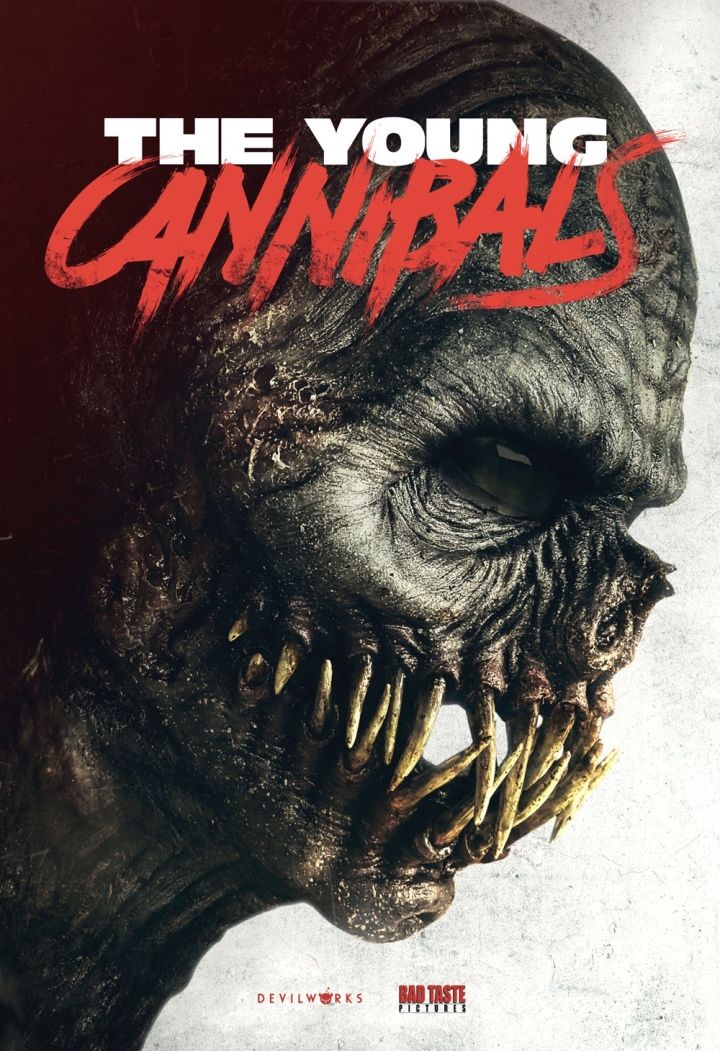 Devilworks Drops poster and Trailer for UK Supernatural Horror ‘The Young Cannibals’ from writer/director duo Kris Carr and Sam Fowler.
Starring Megan Purvis and Hannah Louise Howell, this fast-paced horror follows a group of friends as they arrive at a secluded campsite, where they plan on spending a relaxing weekend by the lake. What they didn’t plan on, was being tricked into eating burgers made of human flesh. This act summons an unrelenting supernatural creature, which hunts them down one by one.

The film was produced by Charlie Pride for Bad Taste Pictures.
Devilworks is representing Worldwide rights and will start to sell at the upcoming Cannes

Juan Frausto, director of Road Kill and Once Upon a Time in the Hood, invites you to log on for a streaming screamfest that will leave one girl possessed… and you on the edge of your seat!
Playing with a Ouija board is dangerous, and college student Rebecca Clarkson (Katherine Munroe) is now documenting the proof, as day by day a demon takes possession of her while a webcam audience watch the horrific event.

A cynical counselor at a crisis hotline finds himself in a life or death situation when a young man calls and threatens to kill three people and then himself.

Corey Jackson, Christian Gabriel and Pano Tsaklas star.
Written and directed by Mark Schwab, and produced by Diamond in the Rough Films, Crisis Hotlinearrives on digital and DVD June 11.

Los Angeles, California – Scary Stories, the highly anticipated documentary about Alvin Schwartz’ iconic Scary Stories to Tell in the Dark book series, will debut in select theaters beginning April 26 via Wild Eye Releasing.
Explore the history of one of the most controversial works of modern children’s literature: The best selling teen classic Scary Stories to Tell in the Dark, which scared a generation of young readers and became one of the most banned books of modern times. Scary Stories creates both the ultimate celebration and dissertation of this iconic piece of horror literature.

Following the limited theatrical release – which includes Los Angeles, New Orleans, Columbus, and Texas – Scary Stories will be available on VOD May 7 with a DVD release set for July 16.

Cody Meirick’s film features more than 40 interviews, from family members of author Alvin Schwartz, to fellow children’s book horror authors like R.L Stine (Goosebumps) and Q.L. Pearce, to folklorists, artists and fans discussing the impact that the books have had on both themselves as well as the culture at large. The documentary also explores the various times in which the books were banned or targeted by parent and religious groups as ‘satanic’ or otherwise too macabre for its targeted teen scholastic audience.

Penned by Schwartz and illustrated by Stephen Gammell, Scary Stories to Tell in the Dark is a three-volume series consisting of short horror stories for pre-teens and children that were adapted from American folklore and urban legends.  Because of some of the violent illustrations and the subject matter, parent groups, religious organizations and school boards had the books pulled from libraries and schools at various times. A feature film adaptation of the books, produced by horror icon Guillermo del Toro, is due in theaters this summer.